Bloomsbury has launched a collection entitled Literatures as World Literature, and the series deserves attention in many ways. On the one hand, it broadens the usual horizon of approach to national literatures, looking for the imprints of literatures in their effect, in their networking, transcultural potentialities. As David Damrosch defines this approach in What is World Literature?, works of world literature build the process of circulation into their own structures of reflection. Such works enjoy moving in and out of remote contexts, even if they change and adapt according to these cultural translations. In the collection, the individual volumes document not only the functioning of different national literatures as world literature (volumes about German, American, Danish, Romanian, Brazilian literature have already been published in the series), but also a wide range of trends and genres like crime fiction or surrealism.

In this context, it is clear in what sense Delia Ungureanu’s book deals with surrealism. Following the surrealist principle of unexpected encounters, the author shows inspirations and radiations that can be traced back to surrealism, and often beyond, to the mythical heroes and precursors of the current. The book convincingly demonstrates that among the inspirations of non-surrealist authors like Jorge Luis Borges, Vladimir Nabokov, Orhan Pamuk and others there are often predominantly surrealistic concepts. Delia Ungureanu consequently expands the scope of surrealism, as she is primarily interested in the circulation, reception and metamorphosis of surrealist concepts in the oeuvre of major authors. On the other hand, she is quite precise about the historical roots and basic works of surrealism when outlining the exact ideas and concepts that are in motion.

The author distinguishes between two important versions of surrealism: Breton’s initial theory, which was developed by the founder of surrealism in the context of poetry and the surrealistic operation of language; on the other hand, Dalí’s version of surrealism, defined by visuality and then increasingly by the surrealistic objects. The importance of the latter aspect was, of course, recognized early on also by Breton. In any case, we can agree with the author that when considering the effect, the circulation of surrealism in the world, it is inevitable to consider the radiatioin of Dalí’s ideas when describing surrealism as world literature.

Delia Ungureanu investigates antagonisms and hidden references, she is not interested only in the overt influences. Borges, for example, was mostly critical of the Surrealists, yet he published often in the same journals and on the same platforms throughout his career (from the perspective of ‘world literature’ we must include here also the network of translations). It is exciting, when Delia Ungureanu, following in the footsteps of Borges’s Pierre Menard, arrives at the magazine Minotaure issued by the Surrealists, and the graphologist called Dr. Pierre Menard, who discusses the handwriting of Isidore Ducasse (Lautréamont). Previously, in Bataille’s journal Documents, he also analyzed the handwriting of Marquis de Sade. Delia Ungureanu explores also the broader context of these publications, as Borges’s somewhat parodic story speaks in fact about a whole system of literary institutions connected to modernism and surrealism, configuring a set of literary sympathies and dislikes. In Borges’s story the main point concerns, of course, the issue of plagiarism and the reinterpretation of texts in new historical contexts. Ungureanu convincingly argues that one of the sources of this line of thought may be the volume of the pre-surrealist Isidore Ducasse, Poésies, discussed by Dr. Pierre Menard in Minotaure. Another source might be Paul Éluard, who highlights the need for plagiarism while discussing Ducasse in one of his articles.

The Surrealists’ relationship to objects also gives us a better understanding of why they were not afraid of plagiarism and why they saw great possibilities of provocation in the creative arrangement of objects. In the closing section of the book, Ungureanu outlines Proust’s relationship to objects that led to contacts with André Breton, and to a mutual interest. However, what objects in general (including found objects, ready-mades and assemblages) became in the surrealist imaginary is, according to Ungureanu, different from Proust’s concept in one important aspect. Proust’s objects lead to backward references in time, while Breton and Dalí’s surrealistic objects are open to the future. They can also function as premonitory objects.

When Orhan Pamuk writes about The Museum of Innocence and designs his own museum, he is clearly inspired by theories and arrangements of surrealistic objects. Ungureanu subtly states that it is not so much Pamuk’s novel hero, Kemal, who relates to objects in a surrealistic way (he rather experiences the evocative aspect staged by Proust), but Pamuk, who searches for objects while writing his own novel. In this search, he differs from the Kemal who closes himself into a room to look at and touch his objects. He rather resembles Kemal who walks the streets of Istambul looking for gestures while missing his love, attributing meanings to locations and neighborhoods, locations in which Füsun may appear at any time.

The Jenny Colon bag, which becomes so important in Pamuk’s novel, bears the name of Gérard de Nerval’s love – and Nerval was considered a predecessor of surrealism as much as Lautréamont-Ducasse. In one of the scenes of Nadja by André Breton, a car trip almost ends like the love story of the Museum of Innocence. In many ways, Pamuk’s museum objects show similar layouts and desires as Dalí’s memorabilia – Ungureanu’s book reproduces, for example, an object made of Gala’s red shoes that was recently exhibited at the Budapest National Gallery’s Surrealism exhibition.

The radiations of the objects are therefore rendered by encounters and by spaces, something that Delia Ungureanu’s book clearly insists upon. The way surrealism continues to operate beyond the realms of surrealism is itself a surrealist story. 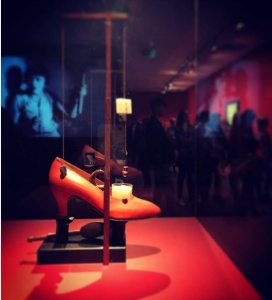